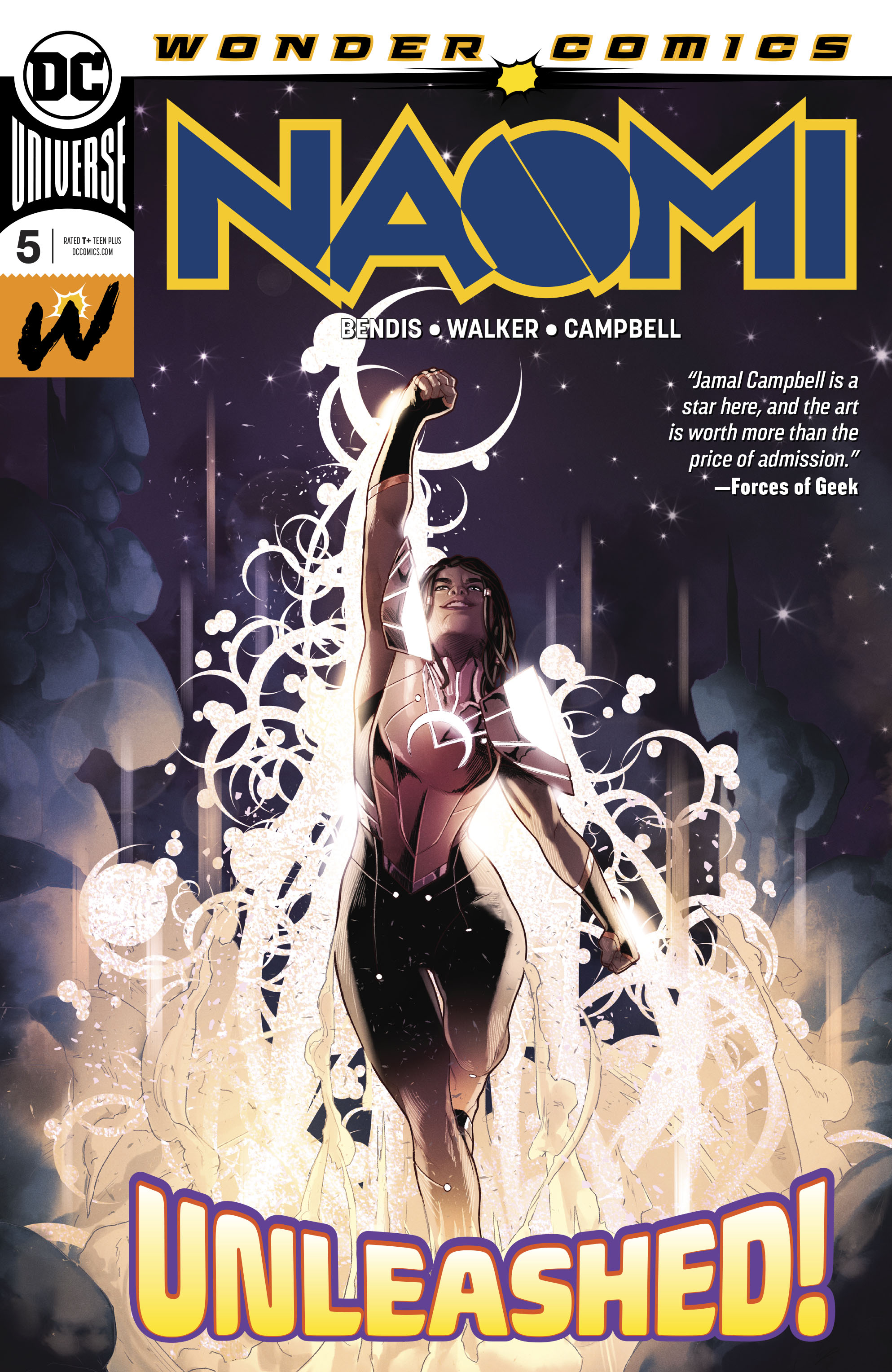 Naomi #5 is published by DC Comics under their Wonder Comics imprint. It is written by Brian Michael Bendis and David F. Walker, with art by Jamal Campbell. With this comic I say, FINALLY, we see some super powers. We find out what happened to Naomi’s parents and planet to. But mostly, I’m excited about the super powers. We found out last issue that Naomi wasn’t from Earth, at least not from this Earth, and even her adoptive father isn’t from Earth, nor is Dee. At least her adoptive mother is actually a human, so, 1 out of 3 haven’t –totally– lied about who/what they are. That isn’t Naomi’s concern right now though, she barely even has time to talk to her best friend, Anna, and process everything she just learned about her birth parents before our true catalyst comes charging through a portal. Outside of the super power reveal, the thing I liked most about this issue was Anna. She is so bubbly and supportive and just the best kind of friend you could ask for. I love her relationship with Naomi and I love that Brian Michael Bendis and David F. Walker immediately sent Naomi to her side after this bombshell was dropped on her head. I don’t know about you, but I go to my best friend for everything. I’m in a wonderful, happy, loving relationship, but if the weight of an entire world was dropped on my shoulders, I know I’d be at her doorstep in a heartbeat and that she’d probably react the exact same way Anna did for Naomi. I could be wrong, but I feel like that is the natural reaction for most women, it definitely is for me, so for Bendis and Walker to capture that so effectively really struck me. As I have said with every issue of Naomi that I’ve reviewed, Jamal Campbell’s art is just gorgeous. I cannot sing the praises of his art enough. The characters are just so human and expressive. I’ll say it over and over because it really blows me away every time. I can’t get over it. And when we see Naomi power up for the first time it is such a beautiful scene that is amplified because of Campbell’s artist ability. I really like Naomi’s armor/uniform too, it captures that otherworldly look without being over the top. Also, it’s a spandex suit that isn’t awkwardly or unnecessarily revealing (it’s unfortunate that it still makes me sigh in relief when I see that sort of thing). Oh, and I especially liked that extra eye detail after her outfit change as well. OVERALL SCORE: 9 / 10 The end of the issue set us up for the true take off we’ve been waiting for and I can’t wait to see what this brand new villain has in store.-


Naomi #5 is published by DC Comics under their Wonder Comics imprint. It is written by Brian Michael-