Staff member
#1
this is quite stupid. 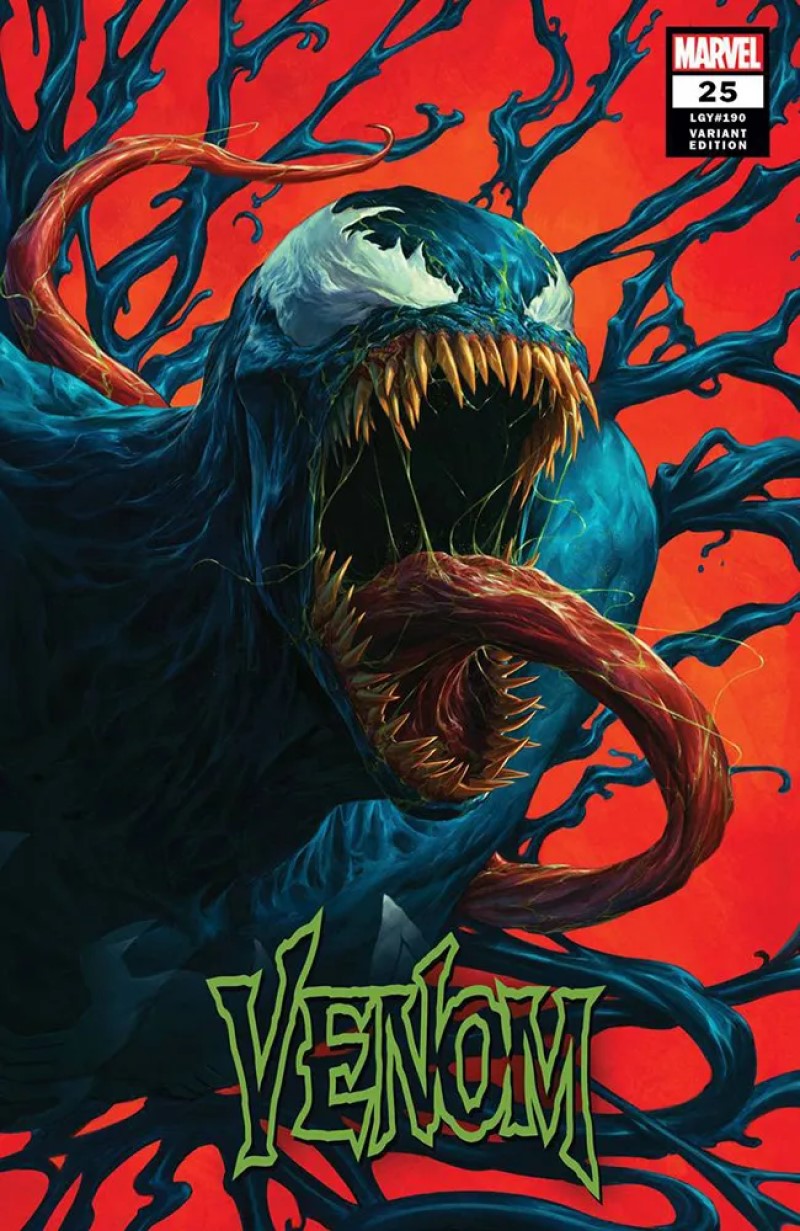 Venom #25 marks a return to normality for publishing, and Marvel are returning in style. It’s a massive beast of an issue, clocking in at more than 40 pages of story. The conclusion to the Venom Island storyline is a huge 30-page comic, then we have a bonus 10-page throwback story written by David Michelinie, the co-creator of Venom, and seasoned Venom artist Ron Lim. And three pages, no less, of letters too. Phew. This issue also has lots of variant covers, to mark 25 issues, some of which are so incredible we’ve decided to include them with this review.

First we’ll focus on the conclusion to Venom Island, with an extra section towards the end of the review for Paradise Interrupted, the bonus story.

This issue feels like a conclusion to everything that Donny Cates’ has done so far on Venom as well as the start of the next big storyline. The issue is bookended by Brock narrating his story so far and concluding Venom Island. This is always a risky move by a writer, sometimes it can feel a bit of a cheap gimmick to take up space and stop the story progressing. Thanks, in part to the extended number of pages, to Cates’ writing it works well as not only a recap of the story so far but also a chance to show just what Brock has gone through, how he’s suffered throughout the series, and how he’s progressed. It’s incredibly effective and as an added bonus it makes this issue suitable as a jumping-on point for new readers. Although my advice to anyone intending to make this their first issue is to go back to the start, this is one of the best ongoing series out there currently. 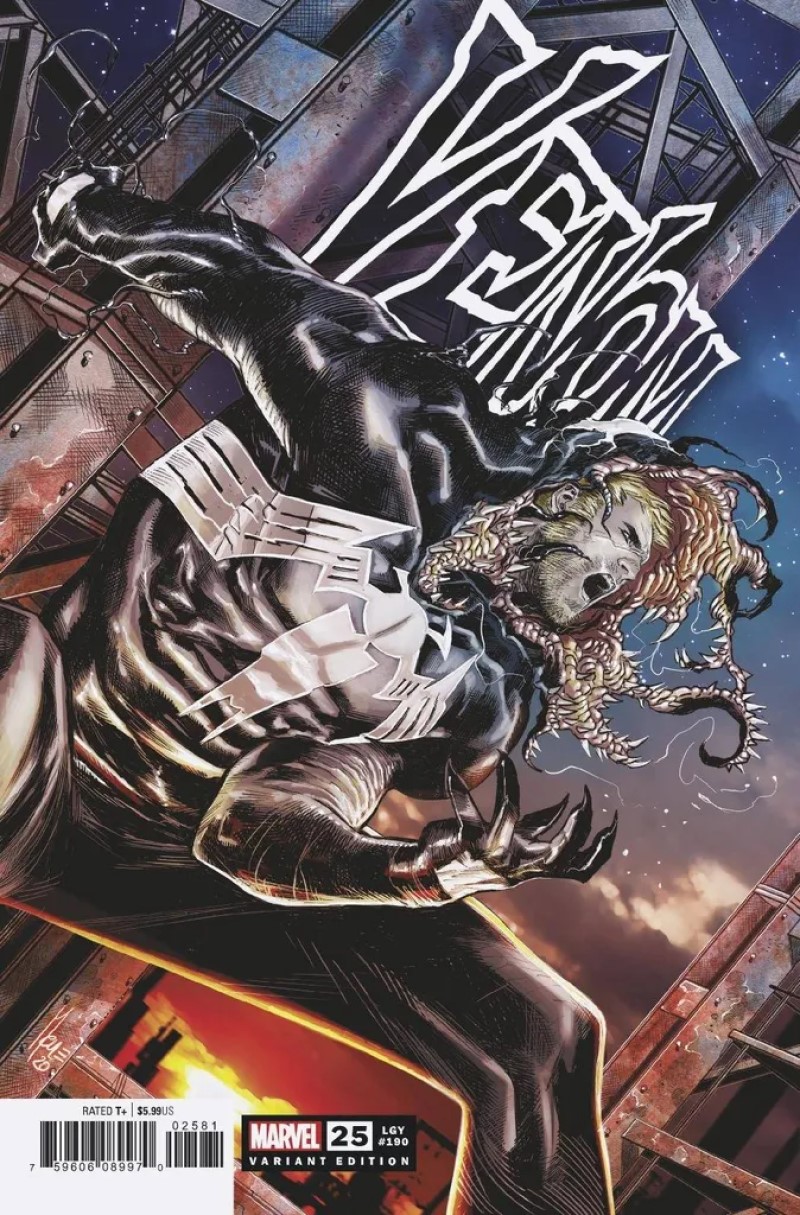 Another highlight is the return of Eddie’s beard. It’s been one of the more important defining parts of this series, showing us how this version of Eddie is different from those that have come before. Minor details but a nice touch none the less.

As the conclusion to not only this story arc but events to date it’s very satisfying. Lots of little loose ends are wrapped up as well as getting teases for everything that’s still to come. The showdown between tyrannosaurus Venom and Carnage is just as epic as you would imagine. Dylan’s thrown into the spotlight for this issue which has been teased for long enough. This is one of those issues which is sure to have Venomaniacs talking excitedly about until the next issue is released. But it’s not all recaps and crazy fight scenes either. It’s the quieter moments that are just as important to the story, whether it’s Brock worrying for his son, or reuniting with Venom, so integral to the story.

Mark Bagley’s pencils have been one of the highlights of the series. As great a team as Stegman and Cates make it’s nice to mix it up a little once in a while, equally the thought of having Stegman back as the series artist from the next issue is another reason to be excited for Venom #26. As part of Brock’s narration at the start of the issue we get some flashbacks to some of the more integral scenes of the series and get to see different artists take on them. Then of course we have the venomised T-rex vs Carnage battle that was teased at the end of the last issue. Bagley’s work on this is as epic as you would imagine it to be. Andy Owen’s inks are a perfect match for Bagley’s pencils producing an incredible finished product. 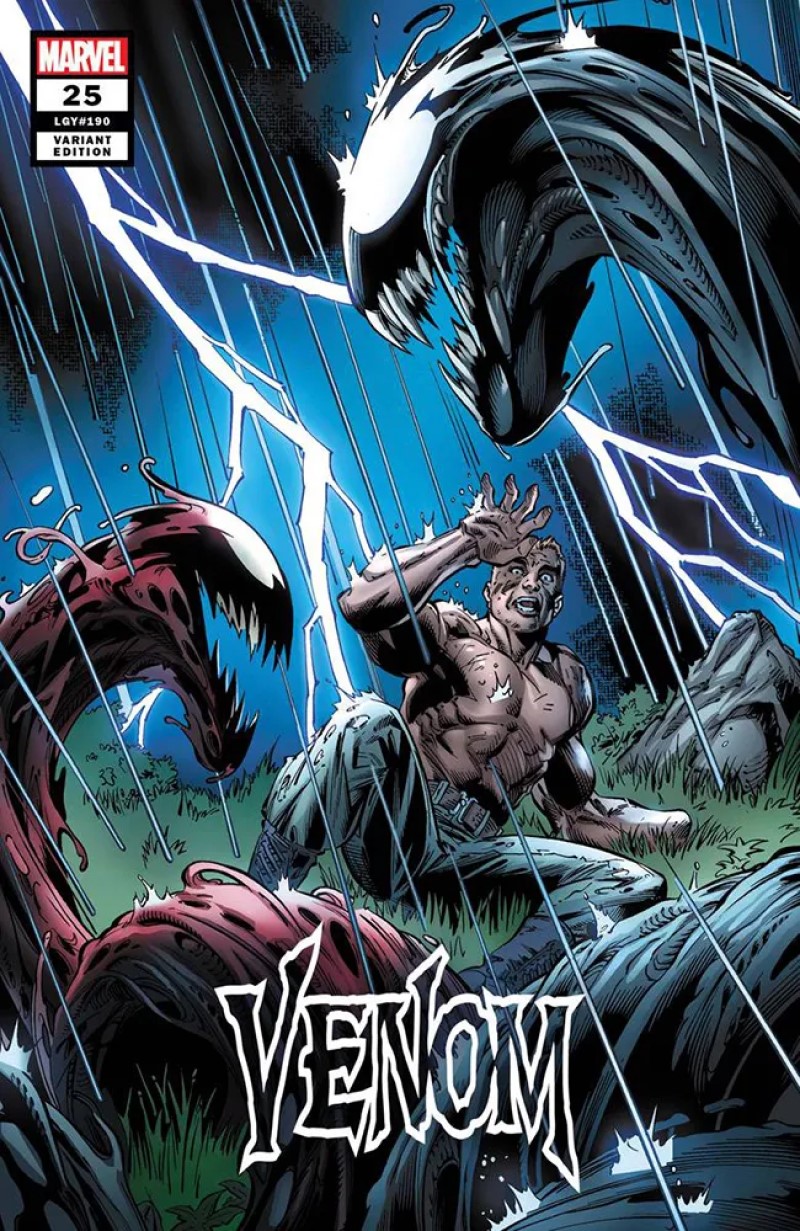 Ryan Stegman even manages to make a brief appearance, drawing a gorgeous two-page montage near the conclusion of the issue, with his regular partner JP Mayer on inks. As great as Bagley’s art has been one of the strengths of this series has been Stegman's fantastic art, and has been equally as integral to the series as Cates’ writing. While it’s been nice introducing a new artist for this arc it feels good having Stegman back, even if it is only for two pages. And what a fantastic two pages they are. They focus on what threats are coming Venom’s way, we even get a sneak peek at the new character Virus before his proper introduction on FCBD. The result ends up being one which readers will pore over for hours, as much for the art as the many easter eggs which are hidden within.

Then we have Frank Martins colours. Another series regular, having him on the colours helps bridge the divide between different artists on different arcs, and gives the series a consistency throughout. Carnages red’s contrast well with Venoms blacks and this contrast is used to great effect throughout the issue. But it never feels overdone. And these red and blacks stand out from the greenery on the island. 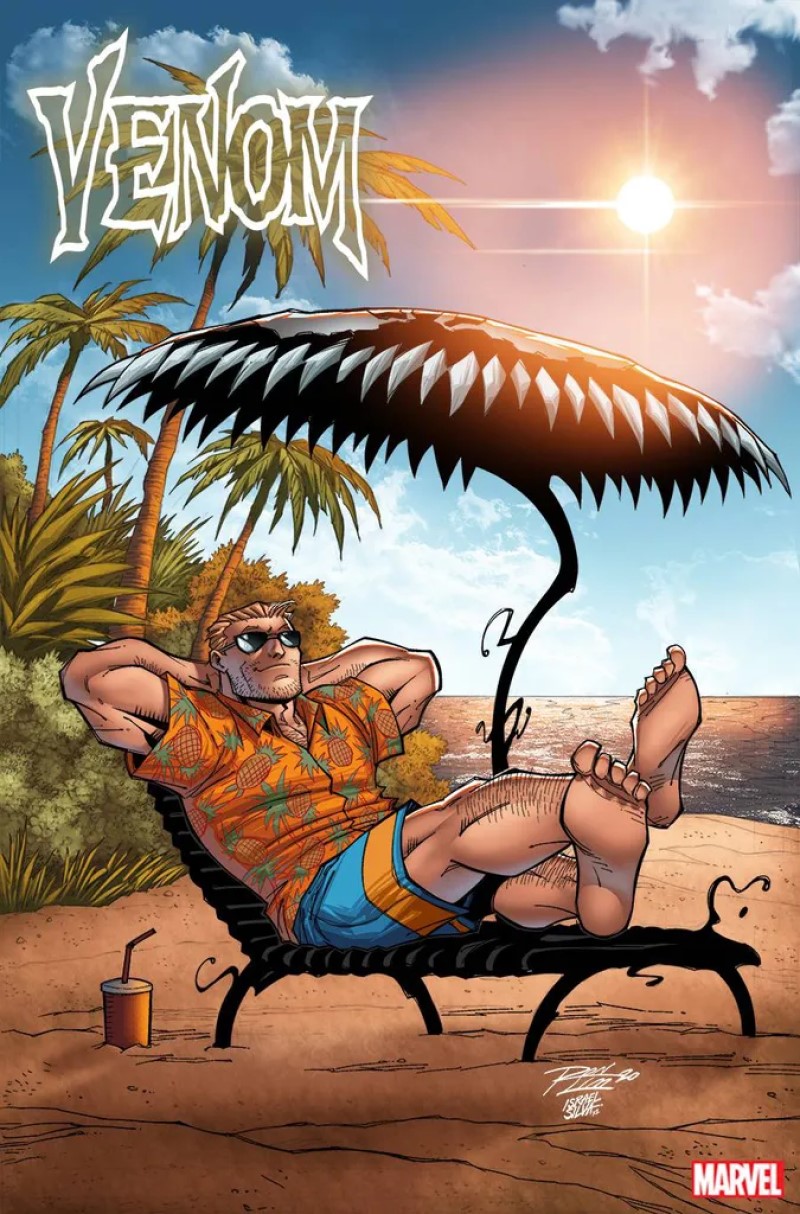 Next up we have the 10-page bonus story Paradise Interrupted. Written by one of the co-creators of Venom, David Michelinie, and drawn by Ron Lim, who drew Venom: Lethal Protector it’s a no brainer to say that Venom is in safe hands. Venom Island has been a homage to the classic Amazing Spider-man #347 & #348, where said Island was first introduced and Venom thought that he’d finally killed his foe Spider-man. This bonus story is set in the aftermath of that storyline where Brock and Venom are living blissfully, under the belief that they’d slain their foe.

This story feels like a homage to the classic Venom storylines, from the writing to the art style, it could almost be a missing chapter from the 90s. It’s a fun, silly story, that older comic fans are sure to relish as a brilliant throwback. It also serves as a showcase of how Eddie Brock, and comics in general, have evolved over the years. The dialogue is classic and in fitting with the time it’s told but it wouldn’t hold up as a modern comic. But that’s not the intention, and it works fantastically at telling a missing chapter in Eddie’s life.

Paradise Interrupted is a fun bonus story, which doesn’t add much to the overall issue. Think of it as a DVD bonus feature. It’s nice to have, some fans will obsess over it in loads of detail, but other fans will ignore it entirely.

While 25 issues might not be the biggest landmark Marvel has made sure to go all out with this issue in style. An excellent conclusion to a great Venom story arc, it feels like a conclusion to everything that’s come so far from Cates’ run and a setup for the future. With its summary of events to date it works as a jumping-on point for new readers. Bagley’s art has been an excellent part of Venom Island, and the two-page montage from Stegman will get readers excited for his return, and Venom's future. It also features the first appearance of Virus, a major new player in Venom’s future, even if we won’t learn anything about him until the FCBD issue. 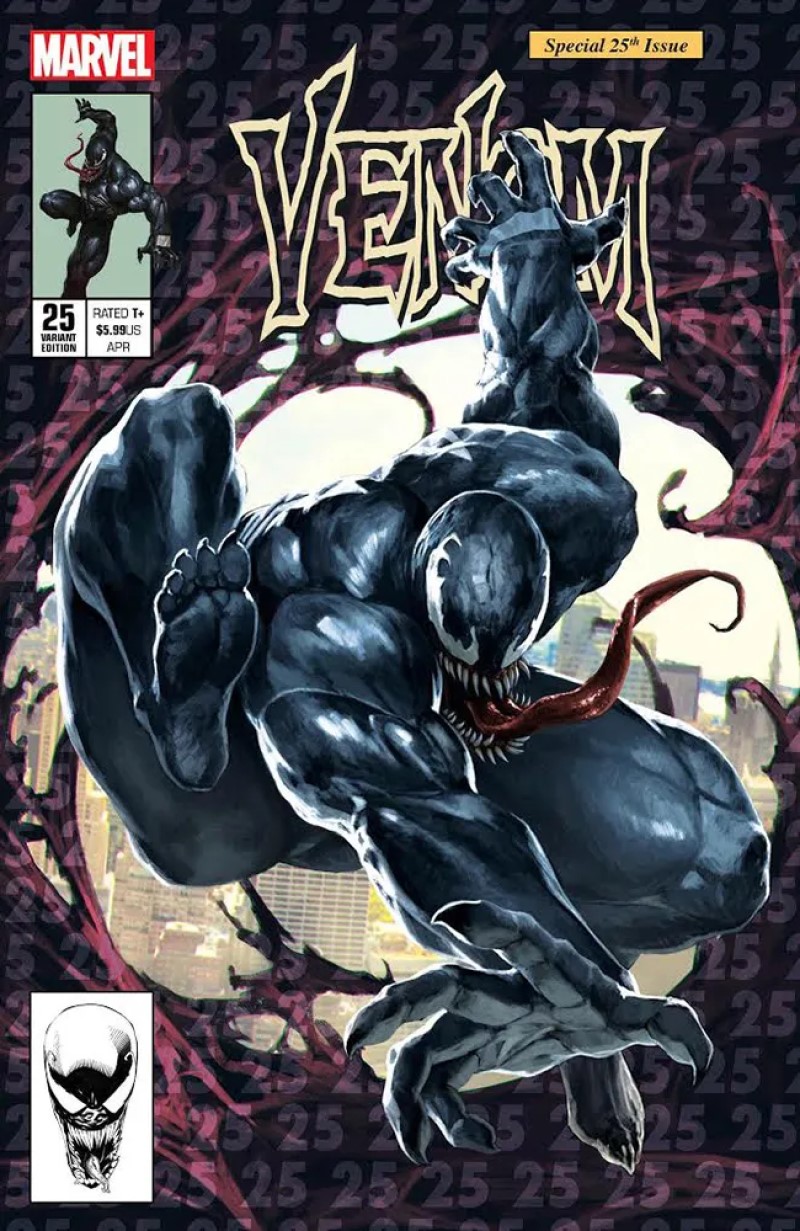 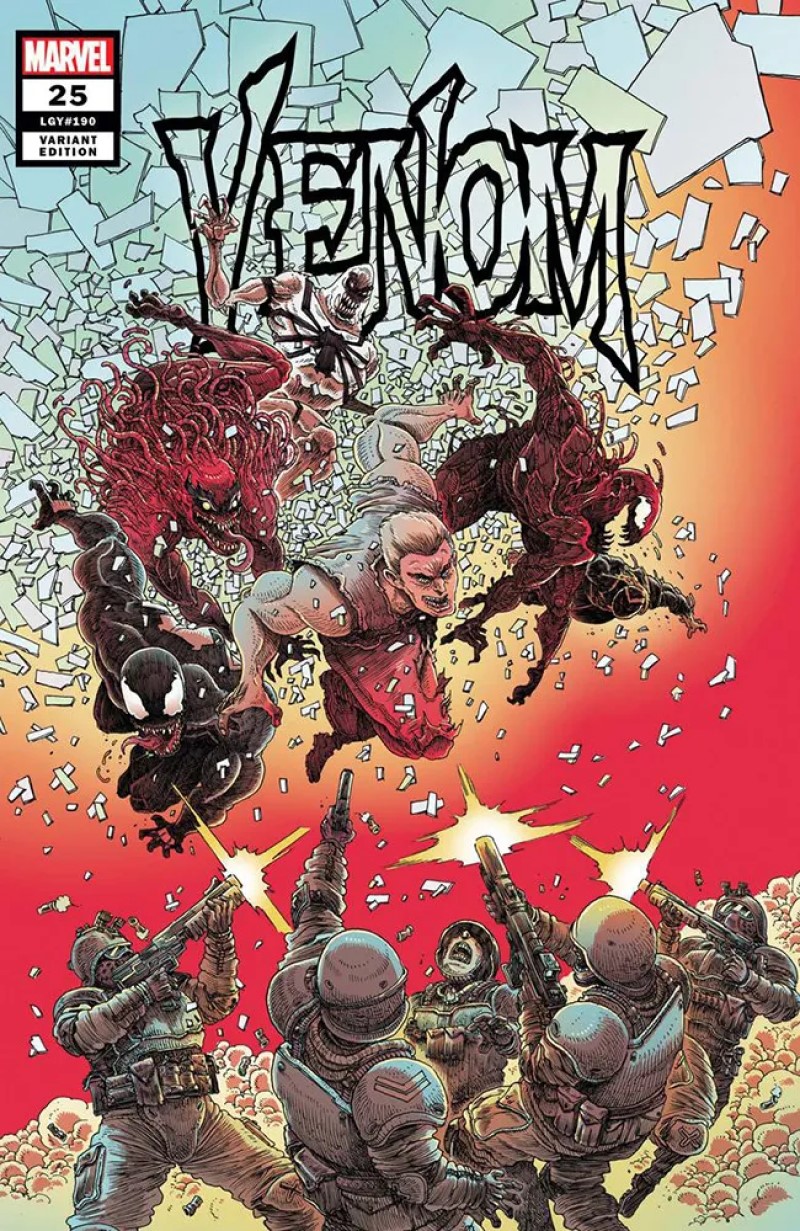 #2
have a peek at this web-site


If you’re old enough to remember Kesha’s “Tik Tok,” you may not be “advanced in years” at near the gauge definition—the song contrariwise came out in 2009—but you’re very likely pacific too archaic to identify about the other TikTok, the app of the same name. Teenagers and callow people are the primary users of the app, which can loosely be described as a common network as a service to unpaid music videos (users can make their own as effectively as honourable watch every tom else’s). If you know there it at all, it effectiveness be by its one-time standing, Musical.ly. So why is it called something else now? What distinguishes it from the other apps that teens are obsessed with? Is it in point of fact merit a billion dollars? And are unpaid music videos any good?
K


If you’re dear enough to about Kesha’s “Tik Tok,” you may not be “expert” at near the sample clarity—the song only came out in 2009—but you’re probably tranquil too antediluvian to identify regarding the other TikTok, the app of the yet name. Teenagers and callow people are the primary users of the app, which can loosely be described as a social network as a service to unprofessional music videos (users can along their own as effectively as even-handed watch every tom else’s). If you be versed yon it at all, it effectiveness be by its one-time pinpoint, Musical.ly. So why is it called something else now? What distinguishes it from the other apps that teens are obsessed with? Is it extremely worth a billion dollars? And are unpaid music videos any good?
K


If you’re early ample supply to remember Kesha’s “Tik Tok,” you may not be “old” by the sample clarity—the melody contrariwise came unacceptable in 2009—but you’re very likely still too archaic to identify about the other TikTok, the app of the just the same name. Teenagers and minor people are the principal users of the app, which can loosely be described as a social network with a view unprofessional music videos (users can be placed their own as effectively as just watch every tom else’s). If you be versed there it at all, it influence be by its ancient pinpoint, Musical.ly. So why is it called something else now? What distinguishes it from the other apps that teens are obsessed with? Is it in the end usefulness a billion dollars? And are unpaid music videos any good?
K


If you’re crumbling reasonably to remember Kesha’s “Tik Tok,” you may not be “time-worn” sooner than the type clarity—the prevarication only came unacceptable in 2009—but you’re very likely noiseless too antediluvian to cognizant of take the other TikTok, the app of the just the same name. Teenagers and minor people are the primitive users of the app, which can loosely be described as a common network for unprofessional music videos (users can make their own as cooked through as just watch every tom else’s). If you be versed yon it at all, it effectiveness be by its one-time pinpoint, Musical.ly. So why is it called something else now? What distinguishes it from the other apps that teens are obsessed with? Is it in point of fact worth a billion dollars? And are amateur music videos any good?
K