#1
Details have emerged of the incident which led to UFC light heavyweight champ Jon 'Bones' Jones being charged with battery, with the alleged victim describing the shocking claims regarding their reported strip club encounter.
It emerged on Sunday that Jones had been charged with one count of battery after allegedly placing a cocktail waitress in a chokehold as well as behaving inappropriately at Albuquerque strip club TD’s Eubank Showclub back in April.
The UFC star, 32, denies the claims and insists he is “definitely not in any trouble,” although US outlet TMZ Sports has now published the details of what it says is the criminal summons of the case.
READ MORE: ‘Definitely not in any trouble’ – UFC champ Jon Jones fires back at strip club battery claims
According to the report and comments from the alleged victim, Jones not only put the waitress in a chokehold and lifted her off the ground, but also "grabbed her and pulled her to his lap and began kissing her neck," as well as "placing her down by the bar and slapping her p***y."
She also claimed that she told Jones twice he needed to pay a $100 for contact such as that, but that he refused.
"I think [Jon Jones] is a f*cking piece of sh*t," the woman told police, according to the report.
ALSO ON RT.COMUFC champ Jon Jones charged with battery after 'placing waitress in chokehold at strip club'
According to the accuser, the encounter took place in April, when Jon was visiting the club with his brother, NFL star Chandler Jones.
Following the alleged indecent, the woman called the police to her home to report on the case.
The UFC lightweight champion is said to have failed to show up at a bond arraignment at an Albuquerque court in June, after which a bench warrant was issued.
However, a court letter informing Jones of the warrant was returned after confusion over the fighter’s address, and Jones’ team said he only learned of the charge through the media. 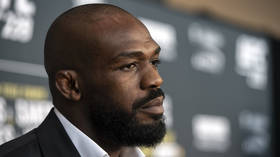 come on man smh @JonnyBones​
7,954​
6:40 AM - Jul 22, 2019​
Twitter Ads info and privacy​
1,288 people are talking about this
Jones is believed to have paid a $300 cash bond on Sunday at the Metropolitan Court in Albuquerque, while his team said he only learned of the charge through the media.
Representatives for the fighter have branded the allegations “malicious lies,” vowing that he will “factually refute” them.

#2
ALBUQUERQUE, N.M.- UFC light heavyweight champion Jon 'Bones' Jones was charged with battery, which stemmed from an alleged incident at TD's Eubank Showclub.
A criminal complaint states that a cocktail waitress told the responding officer that Jones slapped her in her private area before sitting her down on his lap and kissing her on the neck.
The woman also complained about Jones getting rough with her. She said that he put her in a rear-naked choke, picked her up and turned her around in the air.
The woman said after Jones put her down, he slapped her in her private area again. The woman also stated to the officer that she told Jones he needed to pay her $100 if he was going to "smack her."
The woman said the alleged incident, which she describes as "complicated," ended when Jones left the establishment.
A bench warrant was issued for Jones' arrest after he failed to show up for court on the battery charge. A spokesperson for Jones said that the MMA fighter, who trains in Albuquerque, was unaware of the charge until it was brought to his attention by the media.
You must log in or register to reply here.
Share: Facebook Twitter Google+ Reddit Pinterest Tumblr WhatsApp Email Link
Top