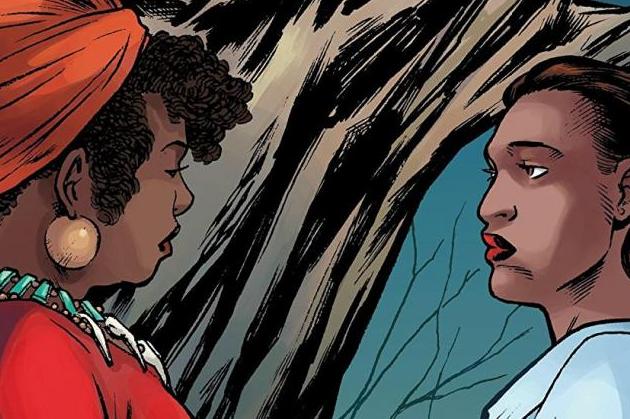 Jook Joint #2 secures the series a spot as one of my current favorites. Tee Franklin is a very talented writer and has written some great comics in the past, but Jook Joint is something special, something that we haven’t seen before. This second issue is violent, sexy, and terrifying making it one of the most intense current ongoing series.

I enjoy this series so much because of the layers that Tee Franklin writes into this story. This issue isn’t just about a woman seeking the help of a magical woman to seek revenge on her abusive husband, which would be an interesting series all by itself. But Franklin beautifully adds so much depth to the storyline that it becomes almost overwhelmingly good.

Those layers aren’t just written into the story, they are also written into the characters. Mahalia is a glorious character that is stunning every single time she is on the page. She has powers and that makes her a compelling character, but this second issue revealed a little bit more of who she is to her sirens. It is also fascinating watching the ups and downs of Heloise as she battles with how to accept her husband’s future deadly fate.

Tee Franklin’s storytelling is impressive because all-in-all, this second issue only takes place in a little more than a night. But in that short period of time, Franklin fit a lot of heavy information into it that makes every panel feel important. The issue also has an intensity to it that makes me almost on edge the entire time that I am reading it. I know bad things are going to happen but what those bad things are, how bad those bad things are, and when they are going to happen is still a mystery to us readers.

Artist Alitha E. Martinez deserves so much praise for this issue because she has created some of the most beautiful and chilling visuals that I have ever seen. The opening scene is written extremely well, but seeing it illustrated so magnificently is what made me feel so many different feelings in the process of reading those first several pages. It is truly amazing how unsettling and captivating she was able to make some of these panels. Essentially, between Tee Franklin’s writing and Alitha E. Martinez’s artwork, reading this issue highlights more harsh realities intertwined with some very dark fantasy.

Jook Joint’s second issue is a gorgeous, haunting piece of artwork that displays some horrifying truth and some terrifying fiction. The storytelling and artwork beautifully create what may be the most thrilling and unique issue of the week. This second issue affirms that this series will most likely go on to become a classic that will be admired for a long time.