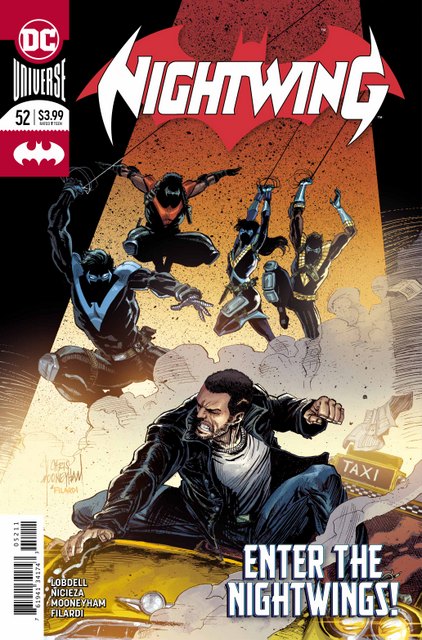 Last issue had enough of a cliffhanger with Ric Grayson recalling some of his past vigilante life while Det. Alphonse Sapienza found the discarded remnants of one of Nightwing’s old bunkers.
Ric tries to make sense of the past he doesn’t remember despite another hint of his old superhero career. Nicizeia is pacing this nicely with just the right amount of teases that Ric will return to Dick eventually without rushing it so fast the partial amnesia story doesn’t have any weight.
Besides Bludhaven might not need Dick back as Nightwing since Sapienza has a plan of his own to protect the Haven. Substitute heroes are always tricky to navigate since fill-ins don’t tend to receive warm welcomes from the established fan base. Nicizeia is writing Sapienza in a way that he’s not viewing himself as the long term solution, just a well meaning guy trying to make a difference in the meantime. It’s a smart approach that’s necessary while Ric regains his memory.
Chris Mooneyham returns as artist this issue. Mooneyham’s art has always been serviceable even if it’s not as strong as artists on the last few issues. For this arc, Mooneyham’s thicker style works fine as the standard gymnastic Nightwing is sidelined.
Lobdell and Nicizeia also do a great job of slowly revealing the link from the Scarecrow scenes that have been teased since issue 50.
I wasn’t a fan of this storyline at first, but Lobdell and Nicizeia have proven they can make it work. This has been a surprisingly strong Nightwing arc and I’m actually ok with a slow burn pace towards Dick reclaiming his identity.
Rating: 8.5 out of 10
You must log in or register to reply here.
Share: Facebook Twitter Google+ Reddit Pinterest Tumblr WhatsApp Email Link
Top