#1
Ray: G. Willow Wilson wraps her first arc with Wonder Woman #62, an issue that raises as many questions as it answers – and takes us back to a topic that the previous two extended runs have both dealt with, with very different results. When we last left off, Diana had successfully convinced the Prime Minister of Durovnia to sit down for peace talks with the rebel leader – but to get there, she has to go through Ares. The God of War has taken sides for the weaker party in the war and intends to take out the leader of the other side before peace can be brokered. Although the PM briefly offers himself up, Diana steps in and the issue’s opening half is dominated by a particularly dramatic fight between Wonder Woman and Ares. We rarely see the lasso of truth actually used in combat, and this issue’s “tug of war” is a great example of how a powerful enemy can gain possession but completely misuse it.

But while Diana is more than capable of fending Ares off, she’s not capable of stopping him. That falls to his fellow God (and ex-lover) Aphrodite. The confrontation between them doesn’t have any action, but it has a lot of meaning and the ability of Aphrodite to essentially neuter him with a few words is highly intriguing. Wilson’s had a very unique take on the Greek Gods over her run, and I’m hoping these are just two of the ones she plans to introduce. The issue neatly ties up a lot of the plots, with a peace treaty and Diana and Steve being reunited with Etta. But by the end of the issue a major new plot has emerged – in the form of a clue to Themyscira. Both Rucka and Robinson have teased the way back to Diana’s homeland, with Rucka clearly being more successful. Will Wilson actually take Diana back home and bring the Amazons back into the supporting cast? We’ll see, but I continue to be consistently intrigued by the ambition of this run.

Ares’ rage. Via DC Comics.
Corrina: In this first arc, Wilson has managed to fuse her interpretation of the Greek Gods with a modern commentary on how superpowers can’t solve long-standing problems of war and peace. Only, the story says, the people involved can do that. It’s not something that can be fought or punched into being. Even someone like Diana, with good intentions, must stand back and let the people involved make choices of their own.

It’s a lovely call for people to be the local heroes they need to be to make the world better.

On the superhero story side, it’s also a great battle between Diana and Ares, with the art making excellent use of the lasso in combat. Ares has always been Diana’s opposite, the one who acts impulsively, violently, with the wrong-headed conviction that he always knows best. (An excellent stand-in for patriarchy?) That’s what makes it so intriguing that it’s Aphrodite, the most feminine of the gods, that stops his rampage, though we’re not given how.

Then the story pulls it back to Diana’s personal quest to find her family, and I’m so on board for the next arc.

#2
The Just War, Finale
End of the arc!
Wonder Woman, Aphrodite, and Steve successfully get the Prime Minister of Durovnia to the old temple for the ceasefire talks. Well, almost. Because of course, Ares is standing in the way, all ready to keep this war kicking along. When you’re Ares, you go with what you’re good at.

A lot gets cleared up in this issue, as it should be in a Finale. The separatist Durovnians felt like the government had called in the U.S. (the side Wonder Woman is on), so they called in their Old Gods, which is why Ares is there. But what’s happened instead of the two sides of the Durovnians fighting, the Americans and the Old Gods have just stomped all over the regular people. They’re totes ready for a ceasefire, some new borders, the usual stuff. Except! Ares wants to keep fighting!

We’re treated to a good Amazon vs. Greek God brawl that is frankly over too soon. These two are evenly matched and each gets to show off a signature move. The art is solid, as it has been throughout the arc, and there are plenty of panels worthy of a Wonder Woman fansite. But just as it is all getting good, Aphrodite shows you why she’s there. She and Ares have history, which she leverages. As a climax to this story, it leaves me wanting, but as a set up to the bigger story — why Ares and Aphrodite are there at all and what’s happened to Mount Olympus — it makes sense.

In the end, there is plenty more thinking and talking about justice and other big ideas, all wrapping up with a terribly modern feeling: there is no end to War, there is only sometimes an end to fighting. As endings go, it is a solid landing, planting Wilson’s Wonder Woman squarely for take-off to her next adventure. Overall, reception for this arc has been lukewarm (not just me!). I’m hopeful, however, that now that the awkward start is complete, Wilson and team can really take Diana into new places and continue to build her legend. There’s a lot of promise in this team-up of Wilson and Wonder Woman that hasn’t yet been realized. Maybe next month! Always, in comics, there’s next month.

But… what happened to the Minotaur? Poor guy…

#3
When G. Willow Wilson was announced as the new ongoing writer for Wonder Woman this past summer, much like Weird Science editor-in-chief Jim Werner, I was ecstatic. Truly, I had begged the gods-of-comic-creative-teams for her to make the jump from Marvel and was rewarded. However, her run has not quite hit home for me yet and by her own admission, Wilson didn’t figure out the voices for all her characters until a few issues in. Does that start here? Let’s find out.
We pick up right where the last issue left off, with Wonder Woman escorting the Prime Minister of Durovnia to a ceasefire meeting with the rebels, only to have Ares ambush them on their way. For a story arc that was kind of billed as a new era for Ares, he’s basically the same dude he’s always been and the generic dialogue for him doesn’t help. Plus, the Prime Minister spouting generic political jargon doesn’t do anything for me. 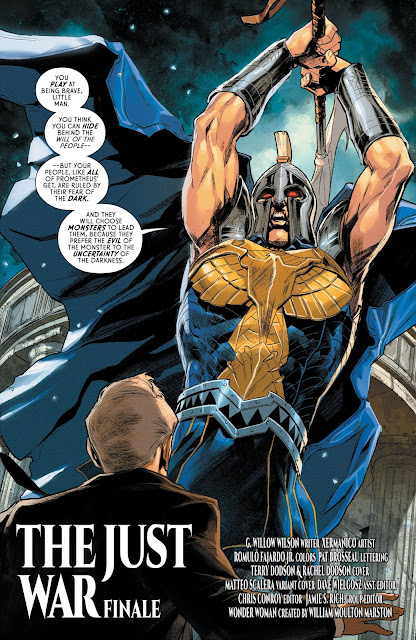 The fight scene that follows is just ok, but there’s a lot here that doesn’t really make sense. Aphrodite, you’re a goddess, why don’t you have the power to fight Ares? And Ares is the god of war – in Greek mythology specifically the god of violence and fighting war, not strategy (that’s Athena) – so is there a reason he wouldn’t know how to fight with a lasso other than to serve a plot point? Seems unlikely. After a couple pages, then Aphrodite decides to step in because… reasons? She has a back and forth with Ares, her former lover, and that’s that. A page later when Steve Trevor asks Diana, “… What just happened?” that could just be me asking G Willow the same thing.


Then we cut to the peace negotiations between the Prime Minister and the rebels, which should interest me but I don’t quite care. The earlier issues of the run never fleshed out the government nor the rebels, we were just thrown into the middle of the civil war much like Diana. While maybe that is a meta-critique by Wilson on what all wars are, I don’t know that! That’s just me guessing. Even if that is what she was going for, it falls flat. When the Prime Minister drops the line about “is it not better to make peace than to be pawns in a proxy war between gods and empires?” I got upset. A war between gods and empires? Is the Greek Pantheon at war with western civilization? Where is THAT story? That sounds like something I’d be interested in, and something Wilson could’ve dug into with the political parallels she’s trying to use here. But the reality is that isn’t the story she gave us and I’m left wanting it now that the idea is in my head! 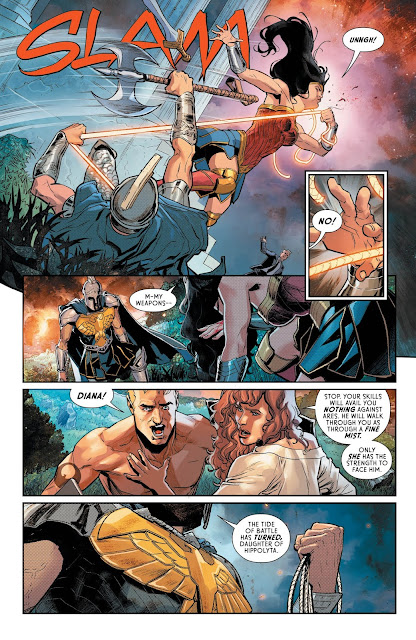 The negotiations feel rushed – two sides that have been bombing the crap out of each other ending their feud just because one of them gives a speech feels thin, even for a comic book. Clearly, it is sped up to give us another Ares and Diana conversation, but that doesn’t do move the needle at all. We do end with a cliffhanger that sets up the return of Themyscira and the Amazons somewhere down the road, but it is mostly irrelevant to this current story. Also – total aside, whatever happened to those mythical animals that had taken Steve captive? They seemed to just disappear when he met up with Aphrodite.

Bits and Pieces
Art remains an improvement over what Cary Nord gave us in the first two issues – I’d really like him to be replaced full time, sadly solicits imply otherwise – but that doesn’t do much to cover up the fact that this first story arc in Wilson’s run didn’t do much for me. It pains me to say that because as I noted earlier, I am a huge fan of hers and wanted her on this book. I can see what she was trying to do with the political side of this story and posing the question “what is a just war,” but she didn’t spend enough time setting it up in the earlier issues, which led to this ending feeling abrupt and hollow. I still have faith, and my score reflects that despite what my review may have indicated – butt G Willow needs to really bring it in the next arc.
You must log in or register to reply here.
Share: Facebook Twitter Google+ Reddit Pinterest Tumblr WhatsApp Email Link
Top