#1
A young Kryptonian’s journey through space hits a snag as she finds herself captured by a megalomaniacal space nazi in Supergirl #26. Writer Marc Andreyko continues Supergirl’s ongoing space adventure with artist Kevin Maguire. Colors are handled by FCO Plasencia and Chris Sotomayor.

Supergirl’s journey through deep space finds her captured by Harry Hokum--American-born self-proclaimed emperor of the Vega System. The man of great resources and advanced technology takes some interest in having captured Supergirl. She is placed in a vast prison that she just might be able to escape from. Operating on super power from a single solar blast, Kara Zor-El has less than two hours to escape before her powers run out. Andreyko keeps the action coming in a fast-paced 18 pages. Pulpy sci-fi incarceration drama has a long and distinguished tradition in pop fiction. Andreyko does little to add much of any originality to a well-worn action trope. The story moves so quickly, though that it scarcely seems to matter. Supergirl comes across as a badass heroine dealing with a villainous space emperor. From beginning to end, the issue delivers an enjoyable space adventure. The placement of the time limit on Supergirl’s powers might be a little misplaced, though. It’s already about halfway into the issue before Kara mentions in a caption that she’s got a couple of hours left before she’s weak again. The critical nature of that time limit really should be a bigger factor to ratchet-up the tension, but Andreyko is delivering a LOT of other plot points in the issue and we don’t get as much time to feel the tension, which is a bit of a weak point in an otherwise fun issue.

It’s a pleasure to see the distinctive art of Maguire return to Supergirl, if only for one issue. (Eduardo Pansica and Julio Ferreira handle next issue.) The distinctive drama and emotional delivery of Kara’s struggle is dynamically brought to another space adventure. Under Maguire, the long-lived villainy of Harry Hokum has a face that looks like across between Donald Trump and Kim Jong-un. There’s a childish egotism reflected in his face that’s countered by the steely determination etched into Kara’s charismatic visage. Maguire has a very powerful sense of kinetic movement in the action scenes that explodes across the page. Maguire’s work will be missed in future issues. FCO Plasencia and Chris Sotomayor help bring Maguire’s work into the third dimension with vivid highlights. They’ve made an interesting choice with respect to Hokum. There’s really no reason why there should be a bright and garish green around the edges of a confrontation between Kara and Harry, but it somehow it works. The background tends to be green around Harry, which gives lends his appearance a sickly, reptilian aura that underscores his villainy.

The spacefaring super heroine is looking good in her 26th issue. Andreyko may be keeping the pulpy space fantasy milieu rolling for now. The tour of the cosmic end of the DC Universe continues to show promise. Supergirl has been paired with interesting allies and contrasted against equally interesting enemies. If DC can pair Andreyko with a steady artist who can accomplish the dynamic balance of Maguire and she’ll continue to be appealing for a long, long time.

#2
Supergirl #26 came out this week and feels like something of a tipping point for me and my patience with this new direction. You know what that's like, right? When you are reading a comic and you just think 'what am I reading?' Or more importantly 'why am I reading this?' Or even worse 'who chose this direction for this book to go in?'

I keep going back to the last issue of the Steve Orlando/Jody Houser run. A young Supergirl trying to figure out teenage life and super-heroing. A Kara Danvers who is feeling awkward at school and maybe having romantic feelings for the first time. A Supergirl who is stepping out from her cousin's shadow as a young hero. An optimistic young woman learning on the job, embracing Earth as home, and appropriately headstrong.

Now we have an edgy, vengeance-fueled Kara, alone in space, spitting on enemies, toting a Liefeld-ian gun, and being casually threatened with rape. This doesn't even feel like a Supergirl book. She is a part of an Omega Men story. Replace her with Maxima or Donna Troy or Starfire and there is no major change to the plot.

Now I know. I don't 'own' Supergirl. I have a version of Supergirl I like and that history seems to think is the default. I don't think I like this story or this Kara right now. I have sort of gone along with this direction for now seeing maybe some glimpses of things which could work. But this issue seemed to tip me towards the 'not working' side of the scale.

And perhaps the biggest shame is that the art on the book is so gorgeous. Kevin Maguire's stuff is beautiful. As always, his expressive work is top notch. The covers by Yanick Paquette and Artgerm are eye-catching. It is just such a mismatch with the material.

On to the book. 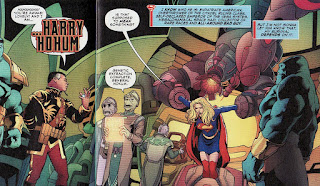 Last issue, Supergirl fought a Frankenstein-ian amalgamation of super-powered races in the form of Splyce.

She awakens this issue in the clutches of Harry Hokum. Strapped up in his lab, she hears how her genetic material has been extracted. Hokum, a sort of mad scientist with a Vermin Vundabar look, is pleased to be able to play with Kryptonian DNA.

It is interesting that Supergirl knows all about him. I suppose it makes the story-telling easier that she can give us a little exposition dump. But I wonder how much studying of Who's Who she's done. Should she know about him and the ongoing political dram of the Vega system?

She says she'll tell him why she is here if he'll free her. When he approaches, she spits in his eye.

This just feels off.

It does give us the icky moment of Hokum gathering the spit/blood mixture off his face with his finger and licking it clean. He's disgusting. 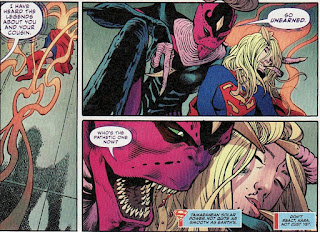 Now in a moment I did like, Supergirl realizes her only access to solar energy is to goad Splyce. After a couple of insults, Kara induces a Tamaranean starbolt, energy she can convert to super-powers.

There is some nice irony to Splyce saying respect for the super-family is unearned when in fact she was just played. 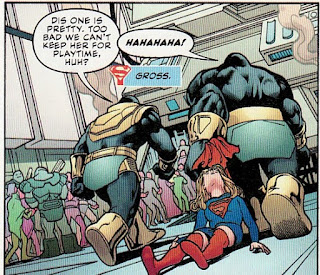 Kara decides to play possum even though she has regained some powers. She allows these Citadel warriors to drag her to the prison cells.

Here is where Andreyko slips in the implied rape threat aimed at our teenage lead hero. 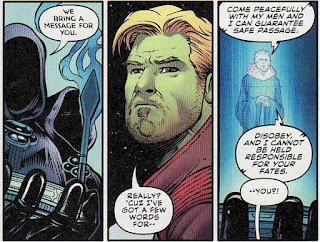 As for Z'nder Kol, he is following closely to Hokum's ship but isn't sure how he can intercede. We don't really know his intentions here, do we? Does he like her? If he only needed her ship to get away, why keep following her. He seems like a rogue. So does he have other plots?

Before he can make a move, Kara's ship is boarded by men working for Circle boss Gandelo.

Most interesting is that Kol knows this guy. Do they have a personal history? Or is Gandelo a public figure? 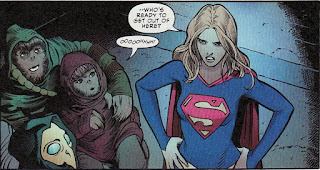 Meanwhile, in the prison section of Hokum's ship, Supergirl breaks free of her bonds.

Realizing she is being kept in a pen with other females who are innocents being starved to death, she decides to lead a prison break.

Again, this is a nice Supergirl moment, helping the helpless. But any heroic character would do the same. Remove Supergirl and replace her with Big Barda and you don't even need to change to dialogue. That's the problem. 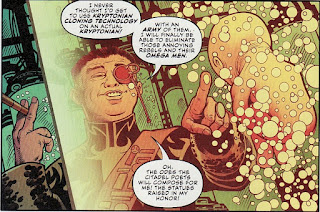 As for Hokum, he is pushing forward with his genetic experiments with Kara's DNA. Despite the chance of instability, he is rapidly growing his clones.

I do love his smug look as he crows about poems being written about him.

But even this doesn't need to be Supergirl. Apokoliptian DNA, Amazonian DNA, Thanagarian DNA ... they all would fit the story bill. 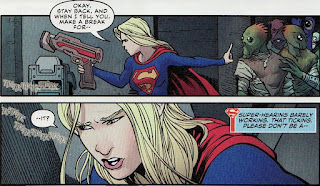 After a skirmish with guards and realizing that she probably only has a limited reserve of power, Kara tries to lead the other prisoners to freedom.

Yep. You didn't see incorrectly. That's Supergirl with a big old gun. What is she going to do? Shoot people? Does that sound like Kara?

The story dictates that she be powerless and therefore this makes some sense. But is that the story I want to read?

Remember, right now Supergirl is in the Vega System, dealing with the Citadel and Harry Hokum.

I suppose I shouldn't be surprised that the Omega Men show up.

The team is on their own mission to stop Hokum from using an unknown immensely powerful energy source. Luckily, their attack just happens to occur when Supergirl is there. And their blasting into the ship just so happens to be exactly where Supergirl is at that time. Hooray for plot coincidences.

We get re-introduced to the team. I didn't read Tom King's series but my guess is this picks up from there. Primus lets his troops loose, including Tigorr who seems intent on killing as many Citadel warriors as he can.

Supergirl initially doesn't join in, more concerned with getting the innocents she just freed to safety. But then Primus gives us another info dump, telling us about what Hokum has been up to. I don't know if this is the King plot or something new. But this convinces Kara to join in.

I love this image, pure Maguire. You get the sense, just from that half expression that this is an almost painful incursion into Kara's mind. And the flood of images above her head gives us the sense that she is almost flooded with the backstory. 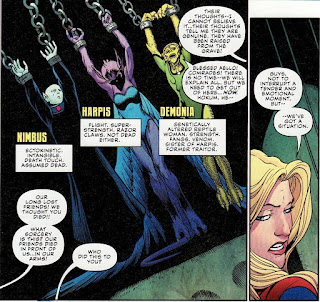 Now part of this crew, Kara breaks into the site of the energy source only to find the three 'dead' Omega Men somehow alive. But now Hokum, Splyce, and the Citadel army have caught up with our rebels.

You know what we didn't hear about this issue? Rogol Zaar. His axe. Kara's true mission.
Instead we get this side story about the Omega Men which Kara has thrust upon her. But I'll say it again, you could replace Supergirl with another space-based superhero and it would probably read just the same way.

This feels like we are approaching that part of the direction where it doesn't feel like it is working. Unforunately, we are probably looking at a while before editorial pulls the plug and sends her back to Earth.