why do we age. pituitary glands responsible for aging.

picture above is wrong as the muscles in the face start to sag and loose its tightness as we grow old. Old age has nothing to do with fatty white tissue decreasing in face.

#2
Where is my pituitary gland? 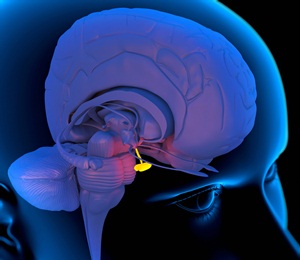 What does my pituitary gland do?
The pituitary gland is called the 'master gland' as the hormones it produces control so many different processes in the body. It senses the body's needs and sends signals to different organs and glands throughout the body to regulate their function and maintain an appropriate environment. It secretes a variety of hormones into the bloodstream which act as messengers to transmit information from the pituitary gland to distant cells, regulating their activity. For example, the pituitary gland produces prolactin, which acts on the breasts to induce milk production. The pituitary gland also secretes hormones that act on the adrenal glands, thyroid gland, ovaries and testes, which in turn produce other hormones. Through secretion of its hormones, the pituitary gland controls metabolism, growth, sexual maturation, reproduction, blood pressure and many other vital physical functions and processes.

Each of these hormones is made by a separate type of cell within the pituitary gland, except for follicle stimulating hormone and luteinising hormone, which are made together by the same cell.

Two hormones are produced by the hypothalamus and then stored in the posterior pituitary gland before being secreted into the bloodstream. These are:

What could go wrong with my pituitary gland?
The pituitary gland is an important gland in the body and the hormones it produces carry out varied tasks and regulate the function of many other organs. This means that the symptoms experienced when the pituitary gland stops working correctly can be different, depending on which hormone is affected.

Conditions that affect the pituitary gland directly can be divided into three main categories:

A cell type may divide and then form a small benign lump, known as a tumour, and the patient may then suffer from the effects of too much of the hormone the cell produces. If the tumour grows very large, even though still benign, it may squash the surrounding cells and stop them working (hypopituitarism), or push upwards and interfere with vision – a visual field defect. Very occasionally, the tumour may expand sideways and cause double vision as it affects the nerves that control eye movements. It should be emphasised that even when these tumours are large, they very rarely spread to other parts of the body.
You must log in or register to reply here.
Share: Facebook Twitter Google+ Reddit Pinterest Tumblr WhatsApp Email Link
Top