If there is one thing you can say about Matthew Rosenberg’s run on Uncanny X-Men, it this, he has definitely made people talk about the X-Men again. His run has been comparable to season 8 of Game of Thrones, or Survivor. People are coming and going at a record pace, and as readers, we have to figure out what is actually happening here. After saying all that, we enter into the 18th issue of the series, and things are cooking. Emma Frost is back in play, and who doesn’t want to see Scott and Emma come face to face again? Matthew Rosenberg continues, much like Cyclops, to take down mutants. This issue we lose more characters we care about, but with Emma in the fold, you have to question what is reality and what is not. Rosenberg has added Juggernaut to his Rag tag crew, which is a fun new toy to use, but the team loses another member or two as well. One thing that Rosenberg has done well on this run, and this issue, is he has kept us guessing what will happen next. This issue, an old foe returns and wreaks havoc on the team. Rosenberg also continues to put this team through the ringer. Their place of operation is destroyed, they lose members, the team continues to hate and resent Cyclops, and this is all just issue 18. It’s anybody’s guess where Rosenberg goes next with this story, but this issue adds to all the twists and turns and keeps us guessing as to what will happen next. The pencils this issue are handled by Carlos villa, with inks by Juan Vlasco and Craig Yeung, and colors by GURU-eFX. Carlos Villa is a fine substitution while Larocca is off. Their styles resemble each other’s so the pencils by Villa have the same feel to them. Vila gives us some good panels this issue, like when the Marauders await their train. Villa sets it up much like a film. We see the Marauders on one side of the platform waiting. The next panel features the train passing them by, and then we see the X-Men on the opposite platform waiting for them. This is a cool set up that is drawn well and may give you chills. The battle, although not extensive, is handled well. The inks by Vlasco and Yeung elevate the pencils that Villa lays down. The colors by GURU-eFX are as good as always. Near the end of the issue as Scott and Alex talk, the dark color used in the room adds to the mood of the characters. Dark reds and oranges are used as people are set on fire. GURU-eFX does great work for this issue. For as divisive as this run on Uncanny X-Men has been, I really like it. We have certain ideas of how things are going to go in comic books, and Matthew Rosenberg is throwing all that out the window. The pencils, inks and colors bring this book to life and make it an overall enjoyable read.- 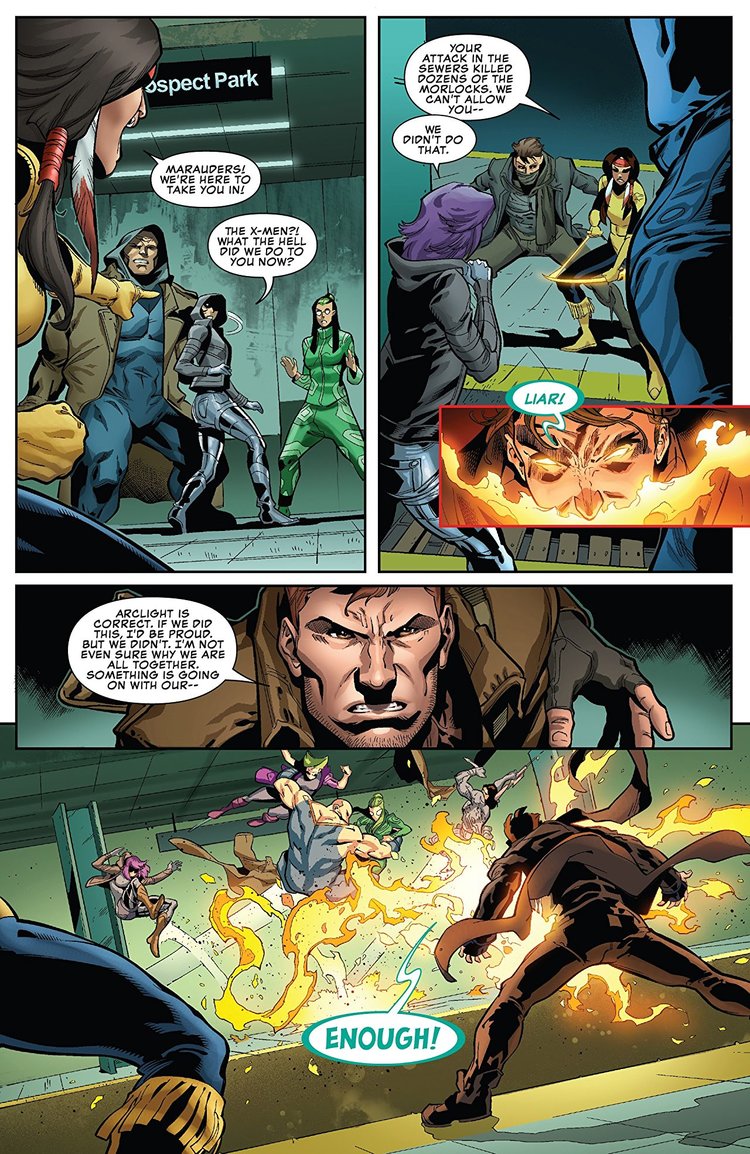 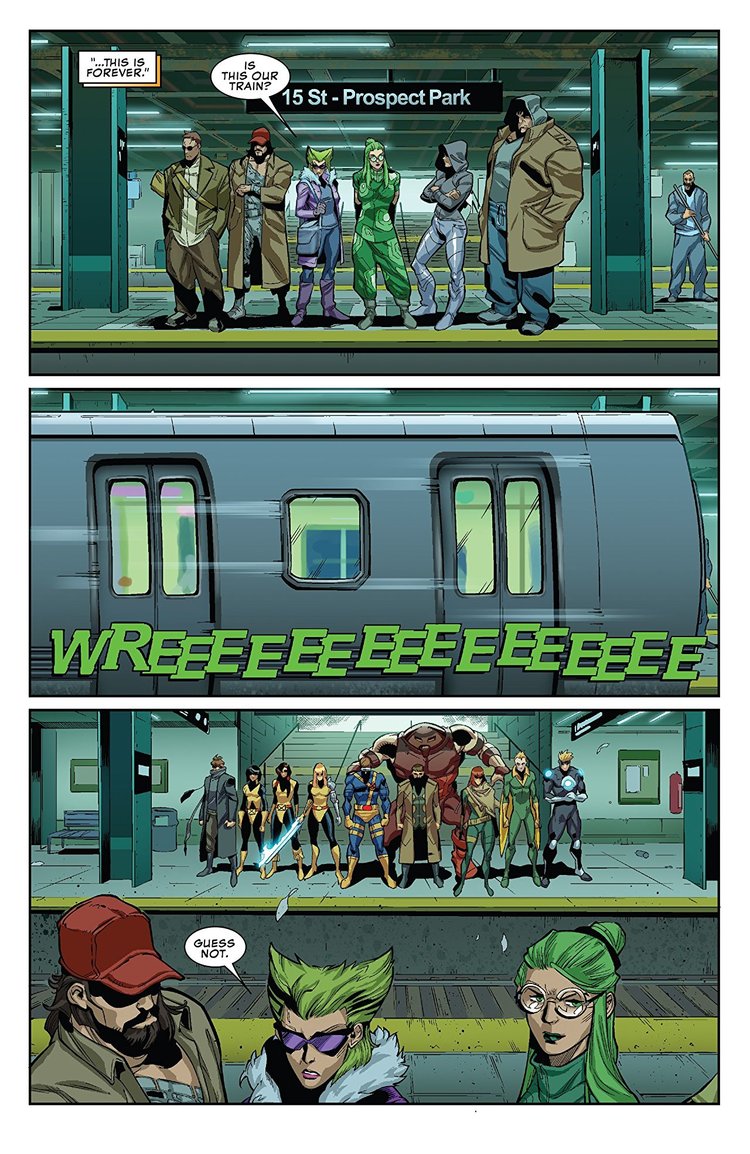 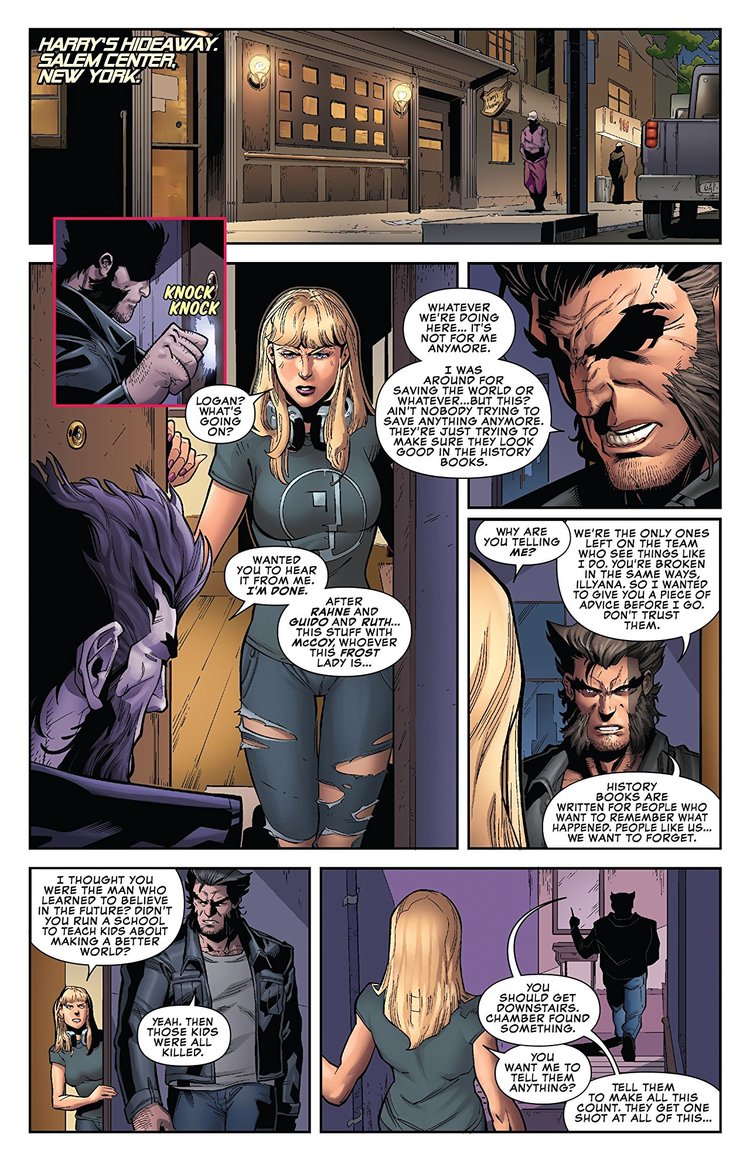 
If there is one thing you can say about Matthew Rosenberg’s run on Uncanny X-Men, it this, he has -