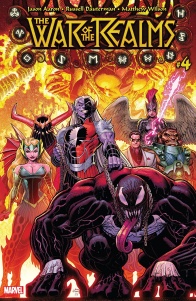 The craziest part of “War of the Realms” isn’t how good it is, it’s how easy it makes writing a humongous Event look. Marvel Events have been pretty low quality in the past, and even the good ones have left their writers a ruined wreck of their former selves. So what’s Jason Aaron’s secret? What makes him so much better than all who have become before him? His secret is knowing exactly what kind of story he is writing- in this case, it’s right in the title. “War of the Realms” is an excellent war story. Cover by Art Adams Written by Jason Aaron Illustrated by Russell Dauterman Colored by Matt Wilson Lettered by VC’s Joe Joe Sabino LAST STAND AT THE BLACK BIFROST! Pray to All-Mother Freyja! For in her hands lies the key to ending Malekith’s war. The Black Bifrost — the only method of travel for Malekith’s vast armies — must fall. Even with the Punisher, Ghost Rider, Blade and Hulk (Jen Walters) at Freyja’s side, how many Dark Elves can one goddess kill? While Freyja’s team heads for the swamps of Svartalfheim, Captain America’s rescue mission in Jotunheim faces the wrath of giants, Captain Marvel leads a global assault team against Malekith’s allies and the Black Panther defends Avengers Mountain against a siege of mythic proportion. None of them know that Malekith has a secret weapon. And its bite will prove most…VENOMOUS. When you think back to previous Events, you might remember a big moment, a splash page, a battle, but they don’t feel like wars. Usually, they feel like a lot of moving parts, then stagnation as everyone waits for the next main issue to come out, then a flurry of motion again, repeat until the big showdown in Central Park (or Broxton, or Times Square, or the Moon, or Wakanda, or whatever). “War of the Realms” isn’t telling a story of a bunch of super crap smashing into each other though. This is a war. There are battles, operations, secret missions, desperate gambits, dramatic turning points, just like in a real war. All the parts contribute to the whole. At the end of the story, it’ll be easy to create a timeline of how each maneuver effected the next. Not too many events can say that. In issue #4, the story becomes a war of logistics. Punisher’s squad delivered Freyja to the Black Bifrost and returned home. Daredevil and Heimdall must protect Jane Foster, who has become the field general. She-Hulk is recruiting dwarves, Blade is recruiting elves, Ghost Rider is recruiting giant spiders (“can’t get any more metal”). Captain America’s elite strike force is returning to Earth with Thor in tow. What’s crazy is that all of those sentences, and a bunch of other throwaway moments in this issue show the scope of the conflict, and each one of those tie-ins contribute to the greater whole. The one panel of Captain Marvel punching goblins establishes the scope of the conflict, but the tie-in issue further explains how her operation is the bulwark against the armies of Muspelheim. You’d expect all these throwaway shots of action to feel like a collection of ads for the miniseries, but they don’t. They really feel like the different battles in an all out, total war. The different fronts all have different stakes, but if any one hero falls, the armies of evil will run rampant. Where Aaron’s mastery comes in is the ease with which he establishes character in each quick scene. Did I mention Venom has a major role to play here? He shows up for a page, but when he gets deployed in the main fight it’s gonna be a huge turning point. These big Events also have a reputation of trying to appeal to the lowest common denominator. It’s hard to argue against that. Most of the issue is made up of super heroes and villains posing and yelling awesome crap. But Russell Dauterman creates a coherent style to this series with almost unnecessary (but appreciated!) artistry. This is most obvious in his strange panel choices. The different storylines use different panel shapes and each one guides the pace with which you read. At first the panels are half circles, pairing up to make 2-beat moments. Then they looking like torn pages fluttering in the wind. Soon, they’re written in smoke, informing us that we are drifting through a montage. The Earthbound panels are more standard quadrangles, but knocked askew in the conflict. After the biggest, explodiest moment, the panels become small, surrounded by white empty space to inform you that you’ve entered a quiet scene. Those all the same after a while, and nothing looks quite like “War of the Realms.”-


The craziest part of “War of the Realms” isn’t how good it is, it’s how easy it makes writin-