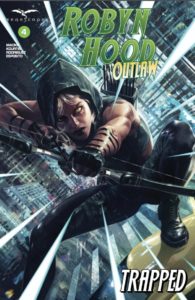 
What They Say: Robyn sinks into the depths of society she didn’t know existed beneath the stree-